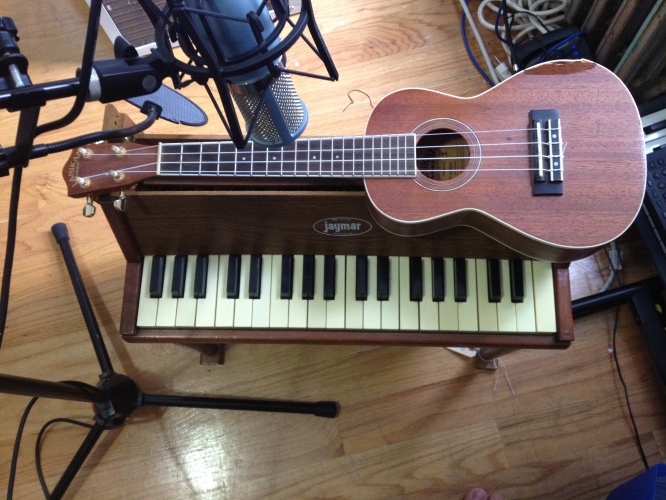 February has been a productive month. I went into it with one big objective: to work on my follow-up to my pop opera The Little Death: Vol. 1, the cleverly-titled The Little Death: Vol. 2. The MATA Festival has afforded me with a nice deadline to work against – I’ll be performing selections from TLDV2 at Roulette on April 19th – but, to be honest, going into February this is all had planned:

A primary challenge was going to be working in a style, both in terms of the music and the method, that I’ve largely grown away from. The Little Death is a project that goes back as early as 2006, very soon after I wrote some of my first ever through-composed pieces of music. It’s written almost entirely in Ableton Live and involves no written-out music – except in the few cases when I have someone else record a part (though Mellissa did without music more often than not!). Creatively, I hadn’t touched anything Little Death since the end of the TLDV1 mastering process, late 2009. It’s now over two years later, and I found myself in that familiar, yet utterly-unproductive, place of utter speculation.

Now if there’s one thing I’ve learned from successfully writing music over the last 6-7 years (successful as in actually getting it done) is that early speculation about a new piece is about 0.1% of the work you should do (speaking personally, others may have different processes). The more the piece resides in the aether of speculation, the more that speculative challenges and threats will arise, and the more chance there’ll be that the reality of the work will never be able to match that celestial work of art in your imagination. Long story short: I speculated way too fucking long on this bitch, and it came time to lock myself in my studio and see what came out.

What came out, based on my two-point plan:

So it’s now the end of February and I have four new songs (totaling almost 20 minutes) that are very likely to appear on TLDV2 – though still firmly in the “demo” stage – and one other I’m currently working on, but I think is going to work.

Here are some tantalizing facts about what TLDV2 is going to feature, based on my work in February:

Tantalizing? Hope so. Stay tuned for more TLDV2 updates (hopefully with some samples!).

One response to “Working on The Little Death: Vol. 2 in February 2012”