Here are a bunch of cars I took pictures of. In most cases I got the emblem and a shot of the car, but sometimes I only got one, usually because I only had a couple seconds to grab it. The most common was Lada, which is a Russian carmaker. Most of the cabs are this make, but I only got a couple shots unfortunately. I think I saw so many that I naturally thought I had more pictures than I got!

I saw a lot of these GAZ cars, which seems to be a Russian/Soviet carmaker: 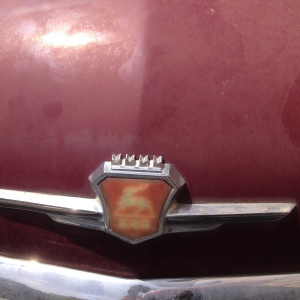 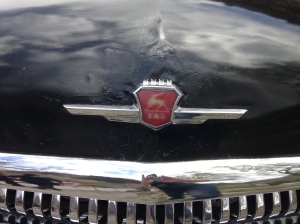 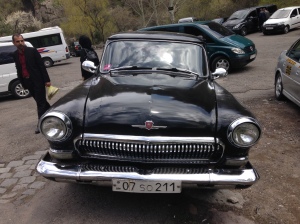 Here’s the back logo of the GAZ cars:

This next one was tricky to figure out, but it turns out it’s made by Kalishnikov, that’s right the same Russian company that makes the AK-47! 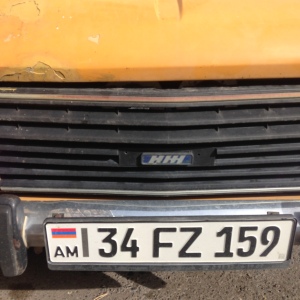 Most of the big trucks were this make, Kamaz. It’s tricky figuring out some of these makes, since Russian uses a different alphabet, cyrillic. And Armenia uses an entirely different one from ours or Russian!

This next one I just can’t figure out. It kind of looks like an make that starts with an “M”, but I’m not sure. Could be middle eastern?

This one is a Chinese maker, BYD. It looks like a completely average Japanese car, but this funky logo tipped me off. 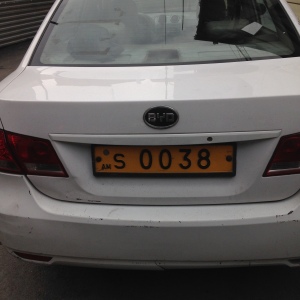 Another mystery, any ideas? in cyrillic those first three letters would be A, Z, P, and then maybe a K? Who knows. 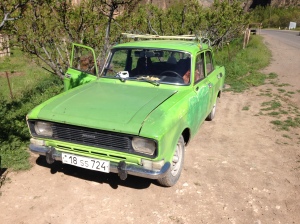 And here’s the Lada cab. 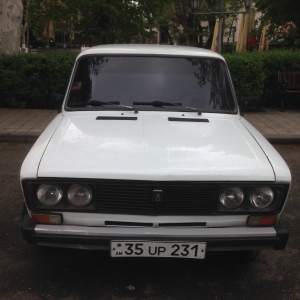 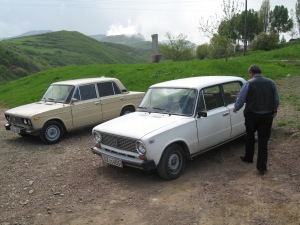 I even got to ride in one! Not as small inside as it looks.

We kept seeing this weird van that looks kind of like a VW bus. It turns out it’s an Armenian-made van called an ErAZ, apparently the only car Armenia ever made:

Last but not least, we were surprised to come upon this Fairlane in the middle of Yerevan! 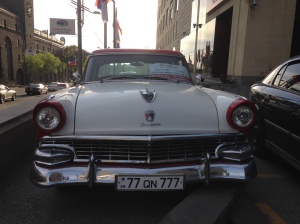 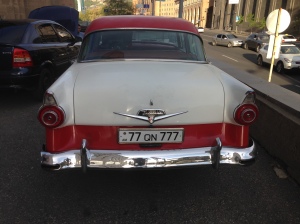 Hope you enjoyed these pics. It was fun looking at all these cars I’ve never seen before.